As part of the year long celebration for New Orleans 300th anniversary, A ‘Navy week’ was scheduled. Part of this Navy week would be several historical ‘tall ships’. A few of them would be tied off on the bank of the river, while two more would be docked in a canal just off the Lake. These two would be allowing people to take a ride on the ships out into the lake!  Of course, the rides were sold out well in advance of the ships arriving.

As a photographer, you begin to become weary of shooting so many similar images. That’s one of the reasons I felt so inspired by our trip to New York last year, different subjects to photograph. The tall ships represented a similar opportunity for something ‘different’ that you just don’t see everyday. So, I was pretty excited about them being here. So excited in fact, that I purchased an app for my phone that would track maritime traffic so I could keep an eye out on their locations and know when they would be arriving. Using this app, I was able to drive down river and, after waiting on the levee for over an hour, get several images of one of the tall ships heading upriver towards the city.

Of course, the ship was under engine power and not using the sails, which was a bummer, but to be expected. Still I was excited to get these shots.

I had BIG plans for several different photos of the tall ships. The last time the ships were in the city, you could just walk up to them. Well, that wasn’t the case this time! Although they were free and open to the public, that wasn’t a 24 hour proposition. When I arrived just before sunrise on Friday, I was disappointed and surprised to be met with a six foot fence surrounding all the ships! Not only that, but there were several vendor tents and other equipment blocking most of the view of the ships.  Still, I worked around these issues the best I could raising my camera up on a tripod above the fence and taking shots, then readjusting as needed until I got the shot I wanted. Well, not the shot I WANTED, but the best I could get under the circumstances. 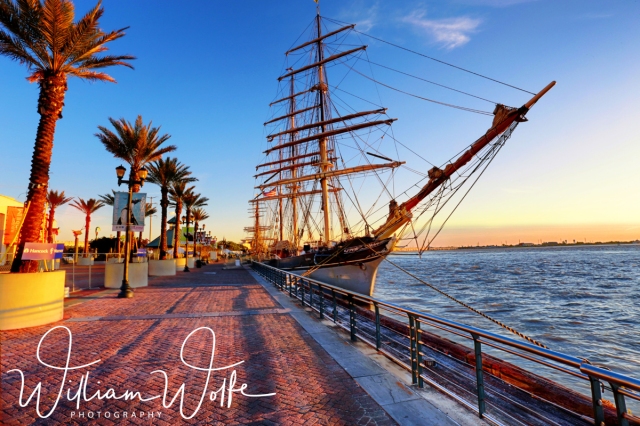 I could have come back at 10:00 AM when the area was open, but that would have meant having people in the photographs – lots of people! Also, the light would be too harsh, so I had to be satisfied with what I got and didn’t go back downtown the rest of the time the ships were here.

The ships out at the lake however, that was a different story!

These ships; The “Lynx” and the “When and If” were on a pretty tight schedule as they had to coordinate with a railroad bridge and a drawbridge which services a fairly busy highway.  The schedule was also available online, so I made a print out of it and began planning my best possible location and times.  While the ships kept to their schedule and I was able to get to the most of the locations I planned on, the weather was a different story (It’s always something!) The first day the skies were too clear – no drama. The second time I went out, there were some nice clouds, which was great, but it so windy that the ships didn’t leave the sails up for the whole trip, greatly reducing the shots that I could get. 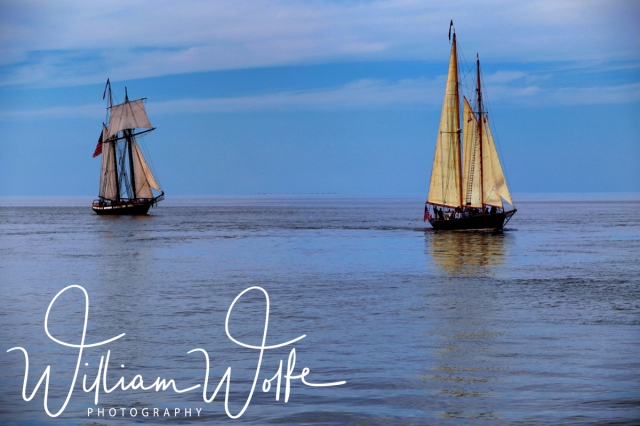 The above images are from the first day while the image below is from the second day; 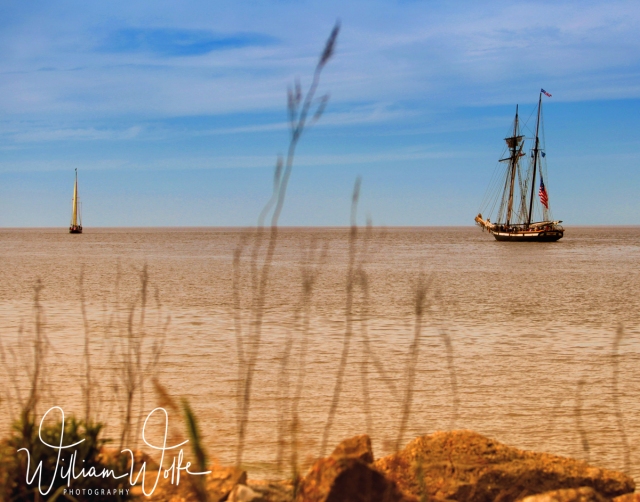 I was even inspired to create a little photoshop ‘art’ with the tall ships;

This above image and the header image for this article are both photoshop composites. This one is pretty obvious, while (hopefully) the other is more realistic. The header or featured image of this post is what I first envisioned when I heard that the tall ships were coming back to our area. The weather didn’t cooperate sadly and there was no available angle to get an image with the ships sailing as the sun set behind them, so I created it!  The power of photoshop!