A couple of days ago I took the hour long trip across the lake hoping for a decent sunset. It’s always a gamble as I’ve mentioned before, but you have to be there ‘just in case’. There were a lot of scattered clouds in the late afternoon, so I felt pretty good about it. Still, the sky can change very quickly, so you just never know what you’re going to get.

I arrived well before sunset and visited some other areas of interest I learned about from a friend (Thanks Rickie!) – more on that later.

Once I got to the lakefront, it was time to scope out a spot where I wanted to be should the sunset work out as hoped. The sun was already pretty low in the sky and, in the light streaming through the branches of the trees I could see little clouds of gnats. Now, if you’re not from here, you’re probably thinking…. so what… what’s the big deal?   If, however, you’ve ever had several of these tiny bugs on you and biting you (all at the same time), then you’ll know exactly what I’m talking about!  Not fun!

You can really barely see them on your skin, but there’s no question exactly where they are! Normal bug spray has limited power against them. A product called ‘skin so soft’ is supposed to work on them, but… well, I’m not going to carry around something by that name!  Sorry, I’m just not.  Sometimes you just have to ‘man up’….. LOL

Anyway, there were a lot of other people at the lake so I wasn’t the only person on the menu, that’s something I suppose.

As I waited and watched the sky, I watched the clouds of gnats grow larger. They seem to be most active at dusk – great!  To top it off, I started to notice a thick layer of clouds right along the horizon – usually that’s not a good sign.

Still, I was already there. Not a time to be too hasty. There’s nothing to do at that point but to ‘ride it out.’

The sun seems to barely move all throughout the daylight hours, but let me tell you, that baby can MOVE at sunset!

I did manage to get several different images from different vantage points, but I literally had to run from one location to the next!

Here is one of the last images I was able to make just before the sun dropped out of sight for the night; 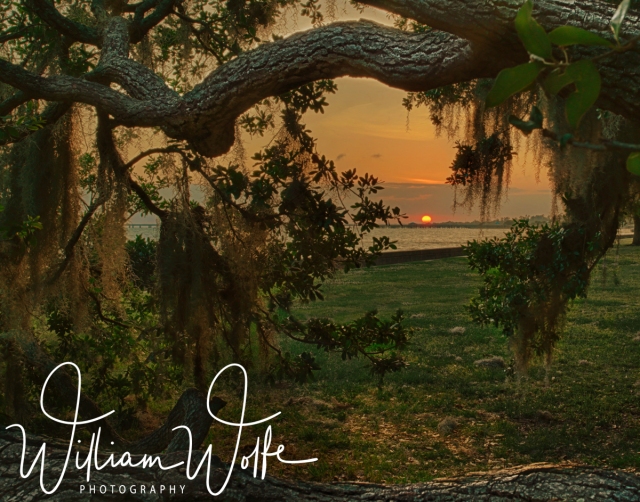 I’m still scratching those gnat bites!  In the end, I think the wait and the bugs were worth it to get this image.  I hope you agree.

See ya next time.